General Characteristics:
The Wapta Icefield is approximately 80 square kilometers in area and it straddles the interprovincial boundary of Banff and Yoho Parks, within the Waputik Moutains (Ommanney, 2002; Demuth and Keller, 1997). The icefield drains on the Alberta side by Vulture, Bow, and Peyto Glacier and on the BC side by Yoho, Ayesha and Glacier des Poilus. Water from this icefield feeds four river systems: the Bow and the Mistaya on the eastern slope and the Yoho/Kicking Horse and Blaeberry on the Pacific slope. The eastern slope is entirely within Banff National Park; however the entire ice field is centered on the continental divide northwest of Mt. Gordon (CME, 2005). Table 1 depicts the change in volume and area between 1951 and 1993.

The terrain within the Wapta Icefield is readily accessible in both winter and summer. The popular traverse routes are north-south, from Peyto Lake or Bow Lake to Sherbrooke Lake (including the Waputik Icefield), and east-west, from Bow Lake to the Little Yoho Valley. The traverses have each been done in a day, which enabled Jean Habel, the first explorer of the icefield, to locate the Yoho Valley, the general vicinity of the glacier in 1897.

The icefield is one of the most studied in the Canadian Rockies and all evidence supports the conclusion that the icefield is shrinking in area, especially near the lowest altitudes of its outlet glaciers, including Peyto Glacier, in which the glacier has become both shorter in length and thinner in thickness. In the 1980's the icefield covered an area of approximately 80 km² (30 miles²) (Demuth and Keller, 1997). 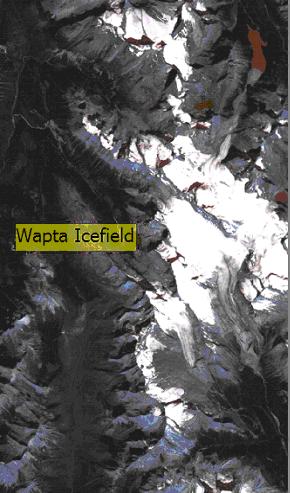 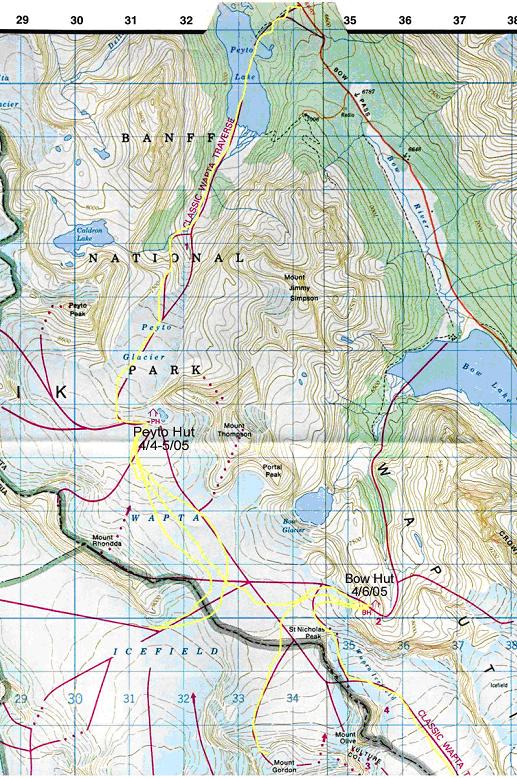