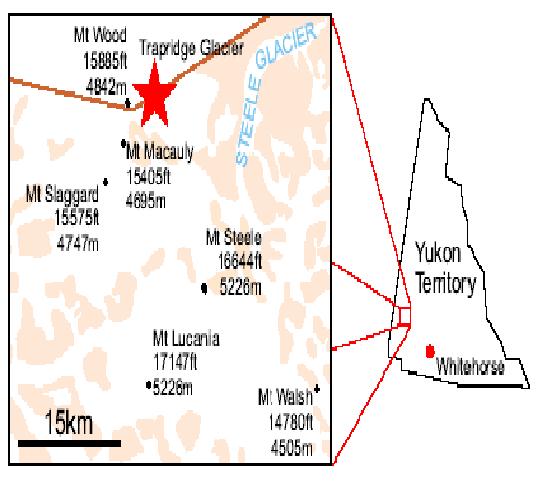 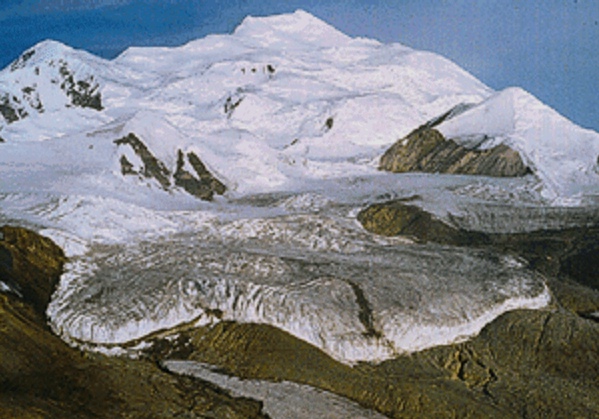 The lower part is the Trapridge Glacier; Mt. Wood and Kluane Park Reserve is in the background.
(Source: http://www.sfu.ca/~gflowers/
research.html. Photograph taken by Dan B. Stone.)


Click here for a historical aerial photographs of the Trapridge Glacier. 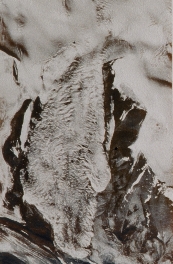 This is the Trapridge Glacier in 1951 following a surge in the mid-1940s. Its shape is expanded due to the surge that had occurred. 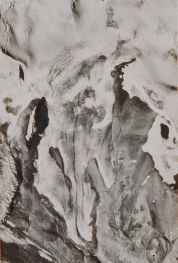 This photocopy was taken in 1968. Comparing this photograph to the 1951 photograph, melting has occurred and this can be noted by the reduction in the size of the glacier from the terminus. There are also a few crevasses that are seen on the surface. 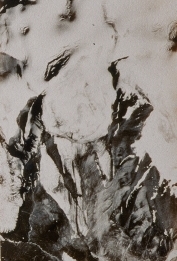 This photograph was taken in 1977. There is a 'bulge' forming as the Trapridge Glacier is getting ready to re-surge again.

Source of the photographs and information in this section is from http://www.eos.ubc.ca/research/
glaciology/research/TrapridgeHistory.html. Accessed on March 8, 2007.

Glacier Behaviour: The glacier has been moving forward at an annual rate of 30m through a combination of sliding and deformation from a saturated sediment layer (Eso, 2004)

Interesting facts: The Trapridge Glacier has been studied by researchers from the University of British Colombia since 1969. Their aim is to gain knowledge on the subglacial processes, specifically, the processes that influence glacier flow. They are also trying to gain knowledge to create a mathematical model in order
to develop a computer model that could stimulate the growth and decay of present and former ice sheets, ice caps and glaciers (UBC, 2007).