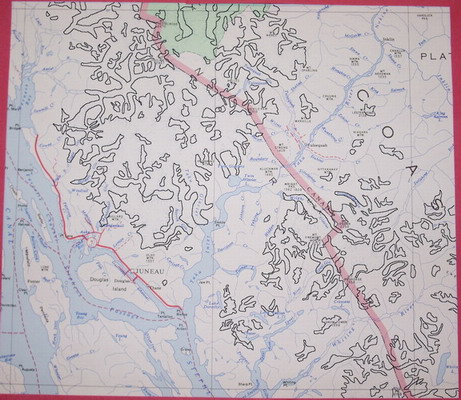 Tulsequah Glacier has retreated 1.1 km since 1948. The terminus of this valley glacier is currently situated in a ice-contact lake. This lake actually extends 2.5 km upglacier. There is no crevassing present at the terminus and it is expected to disitigrate into to lake because it is quite thin. Located in the center of this image is Tulsequah Lake. This lake is located on the ice margin of a Juneau icefield tributary and Tulsequah Glacier. This tributary was once joined to the Tulsequah glacier duiring the Little Ice Age. At the end of the 19th century the glaciers began to recede, creating the ice-dammed lake. By the 1920's, the tributary had receded by several kilometers, which increased the size of Tulsequah lake. Both Tulsequah and the tributary most likely had ice-tongues floating on the surface of the lake. The lake itself is known to periodically drain through jokulhaup events. When the lake is drained, a large moraine, running parallel with the ice margin, is exposed. The presence of this feature indicates that the terminal position of the tributary was stable at the beginning the 20th century. Because of the continued retreat of Tulsequah glacier and the formation of sub-glacial conduits, the lake level is steadily decreasing. Yet even with the decline in lake levels, it still drains bi-anually.