"In the Arctic, where the regional-scale positive albedo feedbacks and
interactions between ocean, atmosphere, and sea ice are expected to
amplify the effects of climate change" (Cubasch et al., 2001).

Climate Change in the Canadian Arctic:

Holocene climate change in the Eastern Canadian Arctic has been influences by 3 factors: (1) the impact on atmospheric circulation by the waning Laurentide Ice Sheet (2) the steady decrease in summer solar insolation as regular changes in the Earth’s orbit diminished Northern Hemisphere seasonality and (3) changes in the balance between relatively warm, salty Atlantic water and the outflow of cold, low-salinity surface water from the Arctic Ocean. (Miller et al. 2005) Baffin Island’s glacial features have been affected by the warming trend experienced in the Holocene. At the peak of the last glacial maximum, warm based outlet glaciers occupied most fiords and sounds, but significant portions of Baffin Island were covered by cold based ice. By the beginning of the Holocene, the Eastern Canadian Arctic had warmed enough that most glaciers were warm based and deglaciation can deciphered from moraines, ice-con-tact deposits and from sediment cores taken. (Miller et al. 2005).
Glacier Change and Climate Change in Nunavut:

The advance and retreat of glaciers have long been understood to be tied to climate change (Ahlmann, 1953 in Bell and Jacobs, 1997).

In 1992, using glaciers from a wide range of climatic regimes, Oerlemans and Fortuin examined the sensitivities of glaciers and small ice caps to global warming (Bell and Jacobs, 1997). They found that under the condition of a uniform 1 K warming, the glacier mass balance will be lowered by 0.4 m/a and this corresponds to an increase of 0.58 mm/a in sea level (Bell and Jacobs, 1997).

Due to the logistic problems associated with completing research in remote sites, continuous field glacier monitoring in the High Arctic is limited to only a few glaciers, mostly confined to the Queen Elizabeth Islands (Bell and Jacobs, 1997). Bell and Jacobs (1997) suggests that Canada can adopt the data collection method used by Iceland, there, the Icelandic glacier observation program train laypeople living near glaciers how to measure and observe glacial patterns (Bell and Jacobs, 1997). In addition, with the recent advancement of satellite imagery, data is becoming more readily available.

From the 1960s to the 1990s, Baffin Island experienced a general cooling trend rather than a global warming trend like elsewhere in Nunavut (Bell and Jacobs, 1997). If this pattern continues, the resulting effects it is still uncertain. 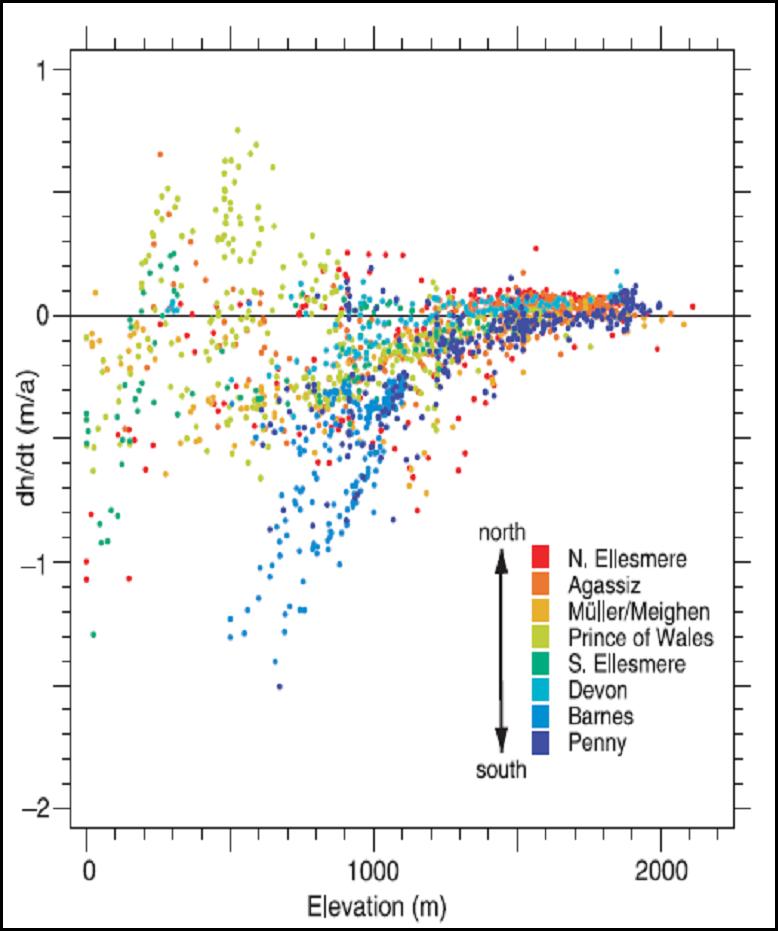