General description:
Boundary Glacier is located along the divide between the Saskatchewan and Athabasca watersheds. At 3,320m asl the glacier flows from Mount Athabasca to a low grade drainage basin at 2,750m (Ommanney, 2002). This has resulted in two ice tongues at 2,356m asl. 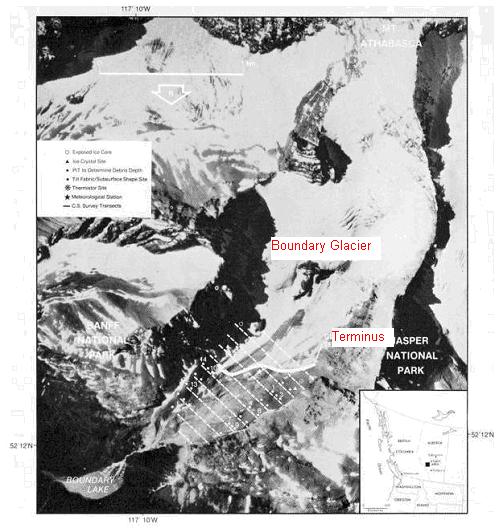 
Interesting Information:
Boundary glacier was formed during the Holocene era and an early neoglacial advance was underway at around 4000 + or - 200yrs B.P. The recession from the maximum neoglacial position probably started in mid 19th century. The recession of the terminus amounted to approximately 900m and produced proglacial landscape that includes a set of veneer-like moraines superimposed on the valley sides. The morains are each approximately 1km in length and the proximal slopes are generally steepest closer to the glacial terminus. The slode gradient decreases downvalley. The moraines exist as a veneer on the valley sides which emerged from debris covered lateral margins of Boundary glacier through supraimposed dumping process as the glacier receds and thins. The debris sources include valley walls and valley side talus. The debris was deposited to the glacial margain via rockfalls, debris flows and torrents and snow avlanches. THe moraines contain an ice core of glacial origin in areas closest to glacier terminus. The mass wasting events are common close to existing terminus and act to degrade the moraines proximal slopes through a sequence of ice core melting and mass wasting. Thus the morain evoles into a veneer like landform over pre-existing valley slope topography (Mattson & Gardner, 1991).