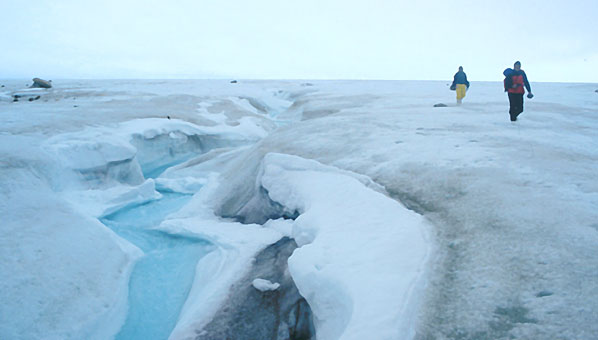 Barnes Ice Cap located at 70º N and 75º W. The summit of the ice cap is approximately 1050masl and extends over an area of 6000 km square (Bell and Jacobs, 1997). Dyke and Prest (1987) indicates the Ice Cap is the last contiguous remnant of the Laurentide Ice Sheet, this finding was supported by the Pleistocene ice found at the Ice Cap’s base (in Bell and Jacobs, 1997). The Barnes Ice Cap is one of the most studied glacier areas on Baffin Island. It is a remnant of the Laurentide Ice Sheet that seperated from it about 8500 years ago (Natural Resources Canada, 2006). The Ice Cap covers an area about 5,935km2. It has three main domes which have a maximum elevation of about
1124m asl on the northwest side (Andrews et al., 2002). The Barnes Ice Cap is known to be shrinking in areal extent from glacial geologic evidence seen around the margin and direct observations (Andrews et al., 2002).

Based on its thermal regime, the Barnes Ice Cap is classified as sub-polar or polythermal, as parts of the base in the south dome are at the pressure melting point (Andrews et al. 2002). Exceptions are where they are in contact with large proglacial lakes such as Conn and Generator Lakes, where the margins of the ice cap are frozen to the base (Andrews et al. 2002).

There is a net accumulation of iced firn and superimposed ice on the higher parts of the glacier, and elsewhere is blue, white, intermediate, or debris-laden ice which is exposed in the outer parts of the ice cap in the ablation season (Andrews et al. 2002). Many meltwater lakes have formed in the depressions on the ice surface.


Changes on the Ice Cap Margin:

Many studies have shown that recession has been taking place for centuries, especially in the south and west, but the recession has not been uniform along the margin (Andrews et al. 2002). Lewis Glacier, which is an outlet glacier at the northwest margin of the Barnes Ice Cap has been studied extensively. Recession of the terminus averaged 25 m annually between 1961 and 1991 (Andrews et al. 2002).

Additional mapping of the Barnes Ice Cap in the southern region was done and results concluded the average recession over the 183km length of the south and east margins between 1961 and 1993 was estimated to be at least 137m (Andrews et al. 2002).

All reserach suggests that should continued warming take place, shrinking of the Barnes Ice Cap will accelerate (Andrews et al. 2002).

The Ice Cap’s configuration was reached approximately 5000 years B.P., and further evidences indicate some parts of the ice cap had readvanced just 100 years ago (Ives and Andrews, 1963 and Andrews and Barnett, 1979 in Bell and Jacobs, 1997).

A general characteristic of eastern arctic glaciers is the annual variation in net mass balance is closely related to summer temperatures, and glaciers such as Decade Glacier is no exception (Bell and Jacobs, 1997). 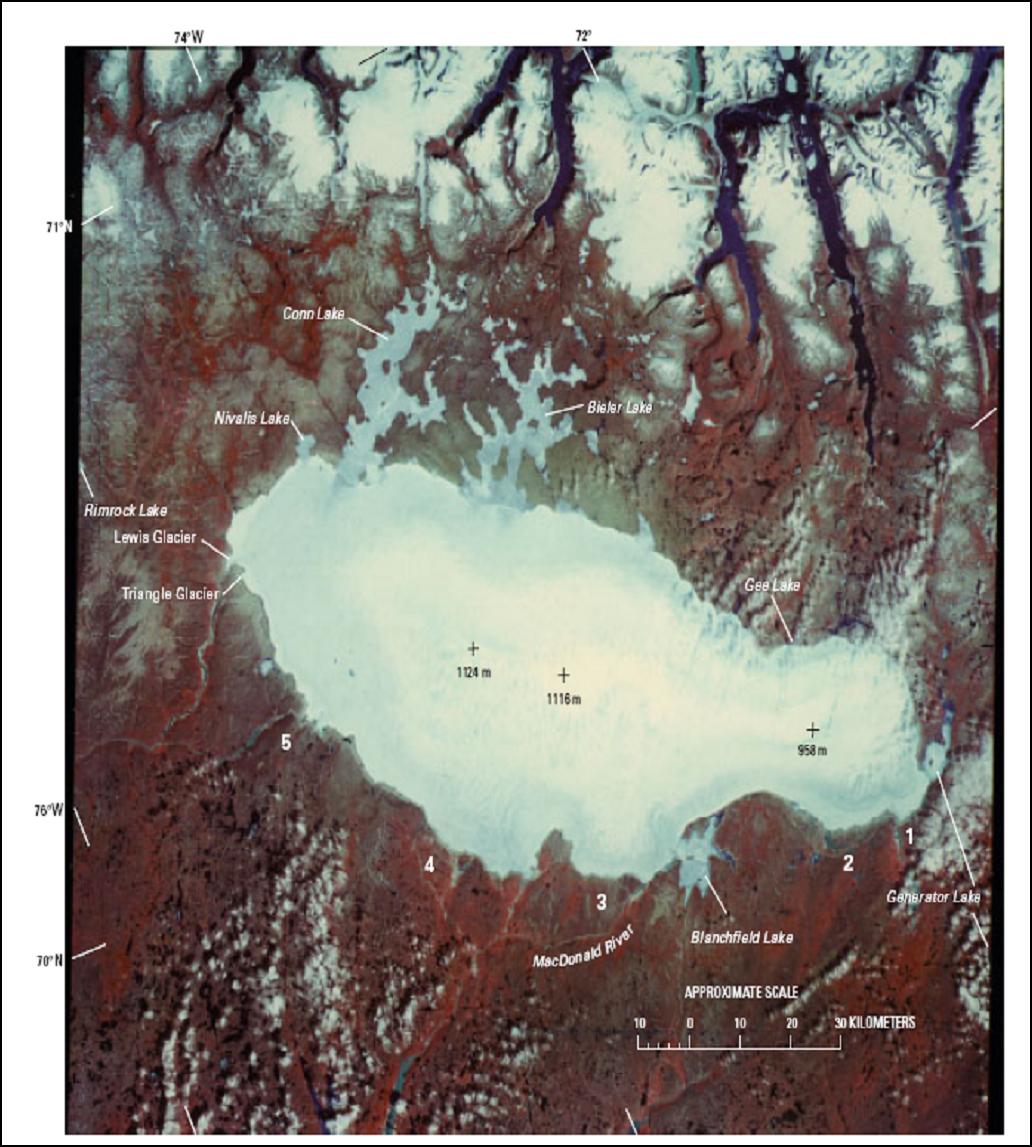 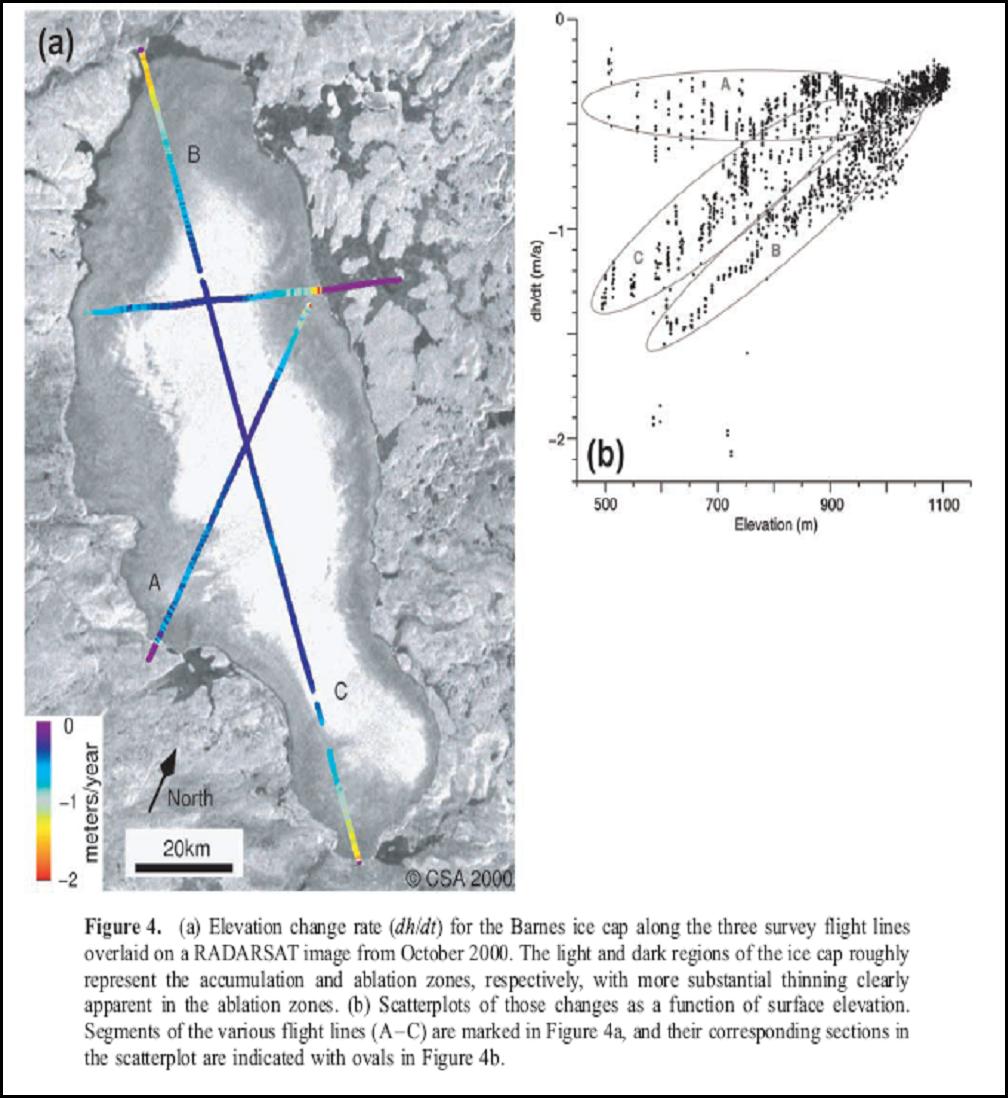